Our Veterinary Centre consists of a team of competent, committed and experienced employees. Allow us to introduce them to you on this page. 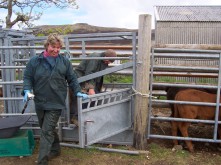 Rhona qualified from Glasgow University Veterinary School in 1985.  Since then she has worked for more than 30 years in general practice, firstly in the valleys of South Wales, then on the Isle of Bute and in Oban.  She then worked as a locum vet and travelled for the next 5 years throughout most of Scotland as well as a short time in New Zealand.  Rhona did regular work at the Old School Veterinary Clinic in Broadford where she heard of a practice for sale in Kingsburgh.

Rhona bought the Veterinary Practice from Neal Stephenson in 2007.  Many changes followed in the practice; getting new premises in Portree, hiring and training staff and equipping the practice to meet the needs of the growing number of pet animals.  Rhona runs the practice and is sole vet for the majority of the year, with the occasional relief by locum vets from all over the world.  When Rhona isn't busy with the practice she is tending to a small herd of cattle or working on her croft that she recently acquired which has given her scope to get a few sheep also.  Her Jack Russell Terrier 'Jeanie' is never far from her side, unless she is off chasing wild rabbits, and will often go out on calls with Rhona. 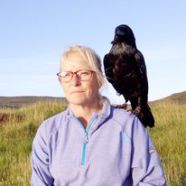 Karen grew up on Skye, working in her spare time at her family’s grocer 'The Fruit and Nut Place'.  Karen completed 3 years of Veterinary Nursing training in Thurso College, while working at Johnston and Farrell Veterinary Surgery in Tain.  After her studies she assisted the running of a sheep farm of up to 200 breeding North Country Cheviot ewes and was the head groom on a stud farm.  After 10 years she returned home to Skye and joined the practice in 2010. Since then she has covered many roles in the practice, both nursing and administration. Karen now works for SGRPID - Scottish government rural payments and inspections division but continues to run weight clinics on a Wednesday evening in the practice and assists our clients with managing their pets weight and advising on nutrition. 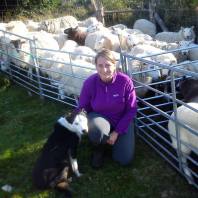 Marion grew up on Skye, spending most of her time on the family croft near Dunvegan. She moved to Aberdeen at the age of 16 to study animal care where she completed a Higher National Diploma.  Following her studies there, Marion worked for the SSPCA in Aberdeen for six years.  She also found her interest in Labradoodles and has enjoyed showing and breeding them since. In 2010 she moved back to Skye to take over the family croft and began working with the practice. After 4 years she started her own business in pet grooming and dog training to add to her croft work. She now works in the practice part-time where she can provide help with any training issues by appointment.

Abbie C is currently in her fourth year at Portree High School. She decided several years ago that she want to (hopefully) study Veterinary Medicine and Surgery in university. She have been doing work experience at the practice for a year now, as well as trying to gain more experience elsewhere off the island, alongside her studies at school. At home, she is kept busy by her two dogs, rabbit and giant African land snail.